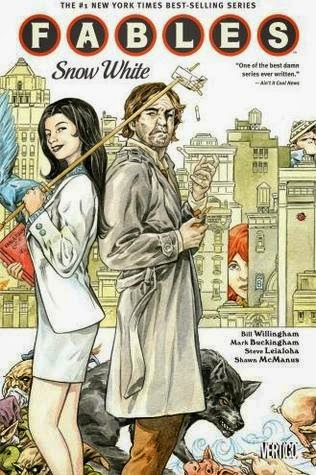 I was pleasantly welcomed to my new city by finding the treasure of Snow White at my new local library!  Snow White is Willingham's latest volume of the Fables series, one of my faves in graphic format.

In this volume, we learn the fate of Buffkin and Lily.  Bigby ventures off to find his missing children, and in his absence, Snow White is faced with a formidable opponent that brings the possibility of major changes.

Buffkin and Lily's story provides a fun little adventure, but my heart lies with Snow White and Bigby.  They are some of my favorite characters in Willingham's world, and the reason I wanted to read what happens next to their little family.  As usual, Snow White proves to be an entertaining lead.  I love the title character's spunk, determination, and independence.  I just don't know if I liked the surprises that popped up at the end of this volume.  Let's hope my library gets in the next installment when it is released.  I just gotta know what happens next, especially with the end of the series on the horizon.

Are you all caught up with Fables?  What are your thoughts on the latest installment?
Posted by Tif Sweeney at 8:00 AM