The Shining Read-along: The Wrap-Up! 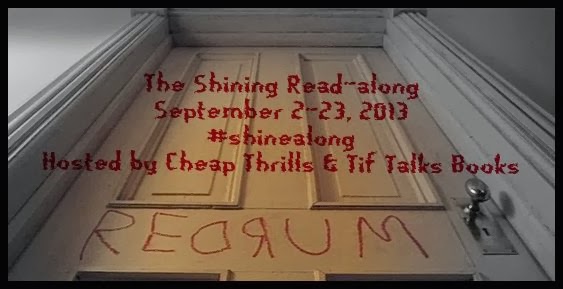 It is time to wrap-up the read-along for The Shining by Stephen King!  Before we get started on our final discussion, however, let's do a quick recap of our previous conversations . . .

Our final discussion will cover Chapter 34 to the end.  Please Note:  All information from here down will include major spoilers for The Shining!  Proceed with caution!

Jack
He's been fighting his own demons his whole life, but at the Overlook he's suddenly fighting a different kind of demon. What do you think about his interactions with the hotel and how easily it was able to manipulate him? (Or was it easy?) And what about his last moment when he tells Danny to run before turning the mallet on himself? To me, that's his moment of redemption. That's where he says, I haven't always been a good man, but by God I'm going to do the right thing now. Do you agree?

Hallorann
This is a man who picks up and crosses the country to help Danny and his family, even though he knows he might not come back from it. Do you think he would have done that for anyone? Or is it just because of the shining that he and Danny share? And in spite of all that, the hotel still almost gets him, in the end, to serve its own purpose. I think that says more about the hotel (and, again, how much Jack can really be blamed?) than it does about him.

The Overlook
What is it about this place? We know that terrible things have happened here over the years. We know that it's feeding off of Danny's energy, and that it wants that energy for itself. But... why? Why is the hotel such a malevolent, sentient force? We never really get an answer about that... any speculations? (Or anything about it in the book that I missed?)

Be sure to hop on over to Charleen's wrap-up post to join in the conversations there as well!  Now, for my thoughts . . .

The first time I read this book, I was in college.  I enjoyed the book and had to watch the movie ... both of them.  King took horror to a whole other level in The Shining, different than in any other book that I had read, including the master of horror himself.  I was impressed at the time.

This time, more than a decade later, I discovered so much more to this story.  King created much more complex characters that I ever could understand on my first read as a young college student.  The complexity grew from life experiences and the ability to really build the story behind the characters throughout the entire story.  We were still learning about our characters, details being revealed in an intentional way, in these final chapters.  I have always admired King for his character development.  I believe that it is him that has created my desire for relatable characters (both good and bad) in stories.  The Shining proves to be a perfect example of this brilliant ability that he has.

As I have mentioned before in our previous discussions, I was also surprised by the amount of foreshadowing throughout the book, even from the early pages.  I do not believe that I picked these up the first time around, but was astounded by King's building of tension through simple one-liners.  Here are a few examples . . .

My final thought before turning it over to you is King's connections.  For anyone who has read multiple books by King, you will find that all of his books are connected in some way.  One visual specifically intrigued me (though it was not in this final discussion section).  The scene was when Danny was talking to the doctor.  Danny saw the doctor's mind and he visualized his thoughts as filed away into file cabinets.  This is a similar concept to what King had used in his book, Dreamcatcher.  These connections fascinate me.  Why does he do this?  Does anyone else feel like he is creating multiple parallel universes by re-using similar pieces or characters?  I have even heard rumors that he continues with these connections throughout the sequel, Doctor Sleep.

I really could go on and on about this book.  In the end, I found that I enjoyed this book and love it more on the second time around.  I cannot wait to read Doctor Sleep, which comes out tomorrow!  Speaking of which ... our Doctor Sleep Read-along will start a week from today.  Even if you plan to devour the book immediately, feel free to check back with us for some discussion and connect with the Twitter hashtag #sleepalong (though be aware not everyone will be flying through, so try not to reveal spoilers).

What did you think of the book?  Did it match your expectations (either from previous reads or just general pop culture knowledge)?  Do you have any thoughts on the book that we didn't cover?  Please feel free to comment or link-up below!

How did you enjoy the #shinealong?  Are you planning on joining in on the #sleepalong?  Anybody want to make some predictions on what we can expect from Doctor Sleep (no spoilers if you have read the book)?