It is our last Fairy Tale Fridays, and we are going to end with a fairy tale of our choice!  I really debated about what my final selection was going to be and after much thought, decided to go with a modern take on a well-known fairy tale.  I also decided to change things up a bit and go with a movie instead.  In case you have not yet guessed what this selection is, let's just get it out in the open . . . Tangled! 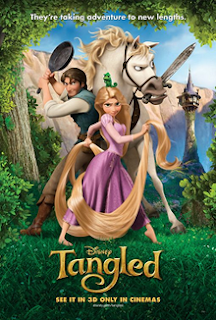 Tangled is the newest Disney film to hit theaters, and features the well-known princess with lots of locks . . . Rapunzel!  I was lucky to get an afternoon with some one-on-one time with my son a few weeks ago and we decided to see this movie for a variety of reasons.  First and foremost, the time was right!  We were planning on doing a little shopping following the movie, so I wanted to see a shorter movie and did not want to wait too long just hanging out at the theater.  Secondly, I simply was interested in the film, especially with all the recent reads of fairy tales this past year.  I was in the mood.  And, last but not least, I was curious to see how the actor Zachary Levi (aka "Chuck") was going to pull off his animated character!

I did enter the theater concerned that my son was going to think that this was too much a "girl" movie.  He recently turned six and has really been commenting on boy toys versus girl toys.  I thought that this would spill over into a movie centered around a princess.  I can honestly say that the topic did not come up once!  Whether he was completely satisfied because he liked the movie or because he was content with his popcorn, I cannot say.  I do believe that it was a combination of the two!!

Knowing the original story, I was curious to see how Disney would add their own personal twist to the story.  Many of the main characters were still a part of the film, including Rapunzel, Mother Gothel, and the prince.  New characters were added though, including a very heroic horse and some rebellious souls.  In addition, there was a number of scenes added to the theatrical version that were not a part of the Grimm version.  I'm talking about the wayward ways of the prince, the weaponry carried by Rapunzel (a frying pan!), and the special powers that Rapunzel's hair holds.  Then again, the Disney version also did not have the desertion, the bearing of twins all alone, and the eyes poked out by thorns!

In the end, I thought Tangled was a nice balance of the classic tale with a new spin.  I liked the balance of princess theme with action in the film.  I liked that they gave the girl a bit of power and persuasion, an inner strength despite being locked in a tower all her life!  I do not believe that it ranks at the top of my favorite Disney films, but it is one of the better princess films that I have seen in long time.  Afterall, I like a princess that can stand her own ground!

What tale did you choose this week . . . . classic or modern?

Next Week:  One week from today, on January 21st, I will be posting my wrap-up post for Fairy Tale Fridays.  When I began the feature, I had only planned on doing it for one year.  Though I am ending my hosting duties of Fairy Tale Fridays here at Tif Talks Books, I am not abandoning fairy tales in general.  I still plan to read fairy tales and even began the Fairy Tale Challenge.  I hope that you will continue the adventures with me in 2011!