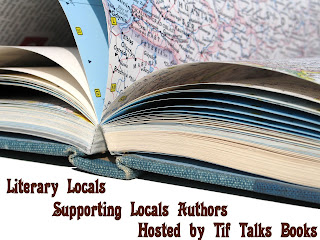 Sadly, it has been far too long since I wrote my last Literary Locals post.  To be quite honest, I have been a poor host these last months.  (It's okay to agree with me here!  I am VERY aware of it!!)  However, I finally feel that I am beginning to get a better balance in my life and I may just be able to get back into a regular schedule of posting some real reviews and moving past my regular weekly features.  My pile of books to review is sadly getting very, very large and I must get caught up before my new shelf for them falls apart from all the weight!!

Moving on . . . let's finally get back to our regular monthly Literary Locals post!  We do not want to miss out in supporting our local authors, bookstores, libraries, etc.  This month I am going to focus on an event that I went to back in December 2009 (told you I am way behind!!).  It actually was a pretty big name and was sponsored by one of the local universities.  As soon as I heard that this man was coming to town for a FREE talk, I knew that I had to do anything and everything possible to make it happen.  Thankfully, I have an awesome husband that was willing to do the same to support my nerdiness!  I showed up early to a HUGE line of people.  I began to get worried that I would not be able to get in because seating was limited.  As the line began to move, I realized that I was actually still towards the front of the line and I was able to get a decent seat.  I sat down, pulled out my camera for some shots (poor as they may be!) and then grabbed my notebook and a pen to take some notes. 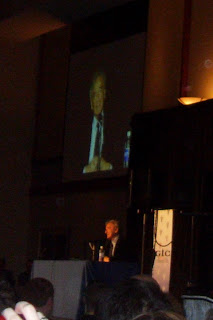 Without further ado, let me share with you my night with Elie Wiesel . . . Holocaust Survivor, 1986 Nobel Peace Prize Recipient, and Author of Night (among many other works) . . .

On December 1, 2009,  I sat amongst 2800 other guests in a large room anxiously awaiting to hear what wit and wisdom the world-reknowned Elie Wiesel had to share with me.  I had read his most well-known piece of work, Night, years before as a book club read.  It was a book that made me experience such a mix of emotions, taking me on a roller coaster ride of sadness, fear, anxiety, relief, and hope.  And, I was about to see this man in person!  I was about to hear life-changing words from a man that had been through the worst and lived to speak about it.  Needless to say, I walked into that room that long ago night with very high expectations.

Wiesel came out and sat at a small table, slightly raised and humbly began to speak.  He was in a bit of shock, not really knowing what to say because he was asked to speak at a Jesuit University!  BUT, despite the differences in religious belief between him and the university . . . really among any of us in the room . . . the words that he shared with us applied to each and every one of us.  He did not speak much of his experiences during those tragic times . . . those times that largely shaped the man that he is today.  Instead, he told us to "Think higher.  Feel deeper."  He encouraged everyone listening to be more sensitive to others . . . to the "otherness of others" . . . and transcend our differences.  These are words I have always tried to live by, but to hear them from this man and in this way, was simply inspiring.  I am talking hair-raising inspiring!  Even as I type this months later, I still can imagine him saying these words in his soft-spoken voice and the effect is still the same.

Not everything was inspiring during this hour with Wiesel, however.  He breached difficult topics with bluntness . . . .


"Will the world ever learn?"
"No!  No because it hasn't!"
I heard these words and my heart literally sank.  Our world has not learned and you still continue to see news reports of genocide and war EVERY SINGLE DAY!

However, he followed this up with a conversation about answers.  Computers seem to have all the answers today.  Computers do NOT have any of the questions.  We are always looking for the answers.  Our life's search seems to revolve around answers.  BUT, it is the "quest" that comes with the questions!  Questions have never lead to warfare.  It is the answers (and the disagreements in these answers) that lead to fighting, disrespect, and hate.

Wiesel also spoke of his religious views.  Before the Holocaust, he was a very religious man.  Today, he cannot understand the presence of God in history.  He asks "Where was He in those times?"  To hear this man who was religious with my almost-virgin religious ears was difficult, but also normalizing for me.  I was not raised in a religious home, have been exposed to a variety of religions, and still remain uncertain and confused about my own beliefs.  I often ask myself . . . "If there were a God, why would He cause such pain to a group of people, to a particular person?  If He is so loving and so willing to accept, why does he allow such pain and discrimination among us?"  Apparently, I am not the only one who asks this question and I have not had such traumatic events occur in my life as Wiesel has had occur in his. 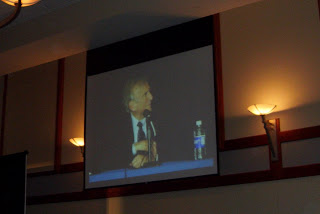 Following this conversation, Wiesel then went on to discuss the theme of friendship . . . how we all desire friendship among all other things.  Even when you examine all of the religious books, or as he describes, "the books of power," God is described as our friend.  We read to discover friendship.  We write to establish friendship.  There is no such thing as inferiority or superiority.  Rather, we are here for one another!

Wiesel tells his story in Night.  He hoped by telling his story that it would prevent crimes today.  Unfortunately, it has not.  The world has not learned from past mistakes.  If this learning does occur, only good things can happen.  We cannot be indifferent.  We cannot be passive.  We must ask the questions.  We must begin this quest!  And, we must do this together in friendship . . . by respecting "the otherness of others."

I went into that room with high expectations of this humble man.  I left that room with even more respect for this stranger, this man willing to put himself out there, to bare his soul, even possibly amongst many who were "different" from him.  He left me inspired.  He went beyond my expectations.  And, he left me only wanting more . . . more of his words, more of his modesty, more of his courage to ask the difficult questions, and more willingness to step up and do so.

Now, I simply work on those questions, respect individuals for being individuals, and model this for my children and those many students I work with on a daily basis.  Some days are harder than others.  That's why I keep reminding myself . . . "Think higher.  Feel deeper."  Remember, "the otherness of others."

What have you done literally locally this month?